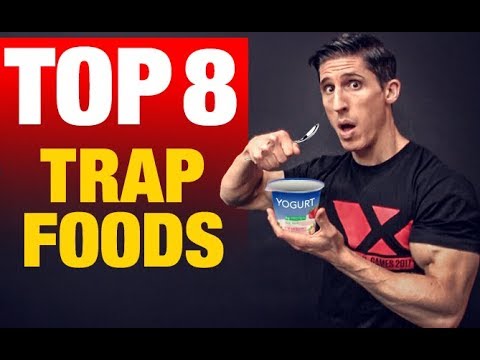 Today we're going to go over those foods that you think are healthy, that I will show you today are actually making you fat We call them 'trap foods' Jesse, could you get through one video without your infatuation for Star Wars showing itself? JESSE: Absolutely not [Chewbacca sound] JEFF: You're going to be seeing more of him in this video, but we're going to go through, one by one, eight of these 'trap foods' here So hopefully, you're better educated as to why you need to avoid them once, and for all

So let's talk about one that I actually picked on in a recent video, in a different form, as an avocado Now here, in all this glory, is guacamole Look guys, there's nobody that realizes the benefits of healthy fats more than me, and knows that guacamole is a great source of that However, whoever stopped at a TBSP of guacamole? Because that has 40 calories in it But what we do is, of course, we go overboard, and the average American eats 10 to 12 TBS of guacamole every time they eat it

Not to mention the fact that they're usually scooping it all up with all these chips over here Before you start telling me "Jeff, you're off base because this food, these healthy fats, they don’t spike insulin So they can't make you fat" Tell that to the person that just consumed 10,000 calories today in fat It goes back to the law of thermodynamics, guys

Science never changes, despite the fact of what your Palmetto Article just told you Guys, if you've ever had a sudden craving for a certain food – I'm talking about the real version of it THE real chocolate chip cookie, or THE blueberry muffin, or even THE potato chips Don’t worry You can satisfy that craving without the guilt that comes from these chemically engineered, over processed, carcinogenic, additive rich, light, reduced fat versions

Which, by the way, usually have almost 80% of the calories of the original Better yet, why don’t you just skip it altogether and opt for a better food choice than either of these? At the same time you'll erase all those chemical question marks that usually come from having these light versions Okay, this next one pains me to say it because this was one of my all-time favorite foods growing up But you're going to figure out why, fast That is: baked beans

You're probably saying "I thought baked beans were healthy" There are a lot of great beans You've got navy beans, pinto beans, lima beans, black beans, jelly beans – oh, wait That's jelly- JESSE: I love jelly beans! JEFF: That's Jesse's favorite Jelly beans? Stay away from the jelly beans, but the beans themselves are a great source of protein, complex carbohydrates, fiber; they've got all the makings of something good

However, we screw it up in the preparation Anyone that's ever had refried beans can tell you that right away, but baked beans is no less of a problem because of all the sugar there is in a single serving here If you have a cup of baked beans you're looking at 26g of sugar Almost as much as in a can of soda So now you see why I love these things so much, and if you are too, you've got to do something about it

You've probably got to switch to one of those plain versions, prepared a lot more simply if you want to watch your waistline in the process All right, what could be more wholesome than a cup of yogurt, with some nice, fresh fruit at the bottom? Unfortunately, a whole hell of a lot of things You see, this right here is my number one trap food because it just seems so darn healthy, and a lot of us fall for it The problem is this: this fruit can be found bathing in the bottom of your cup of calories in a special mixture of corn syrup, sugar, and, oh yeah; maybe just a little bit of actual fruit juice You could opt to eat just the top part if you want, but why bother in the first place? Just buy some unsweetened yogurt and put in your own – holy cow – fresh fruit at the bottom

I know it's a novel concept, but the fact is, it's a lot better way to protect your waistline in the long run I don’t know what it is about the word 'granola', but it even sounds healthy It sounds like 'grains', for crying out loud But this is probably the biggest breakfast sin you're making because of all the high sugars that are being thrown into this, just to hold all that together Now you might be arguing "I make it on my own, so I don’t have all that sugar"

It doesn't matter, guys This, by no means, is a low calorie choice and if you're trying to lose weight, you're not going low calorie here If you've got coconut, you've got nuts, you've got the oils in there, you've got raisins; all these things are not going – they're very calorie dense foods So what I'm going to tell you instead is to opt for oatmeal, and instead, take a little bit of this granola and sprinkle it on the top, just for flavor It's going to give you a much smarter option here for breakfast, and it's going to help you in the long run for keeping that weight down

All right So you're going to dine in light tonight? Do me a favor and stay away from these carb-loaded, pseudo protein belly bombs, better known as sushi You see, with just a sliver of actual fish in here – we're talking about only 15% of the total calories coming in the form of protein – and more sticky rice than you can actually deal with – you can build a small hut with one, for crying out loud The fact of the matter is, they’re so easily eaten, and a single roll can have up to 500 calories, just for a 6 piece roll Tell me how many guys limit themselves to just six pieces

Throw in the added sodium IV drip that you're getting from that low-salt soy sauce and your healthy meal just made a Big Mac look likes beans and sprouts Okay, if you're still attached to your fruit juice, maybe even drinking it from a sippy cup – I'm not going to judge you But I am going to recommend that you cut back because what you're doing to your blood sugar and insulin levels is pretty much putting them on the same ride as, let's say, the stock market, with all the spikes and crashes The big problem here is that they're liquid calories They're far too easy to consume them

You just take a sip, put it down, put it back, and put it down; it's too damn easy But what you want to do is actually try to start getting that from fruit itself The actual consumption of the fruit in solid form makes you, number one, more aware of the food that you're eating; and number two, it actually brings along some of that healthy fiber that you're missing out on by relying on the juice Before you even question how bad these actually are for you, just do me one favor Go and compare a bottle of grape juice, and a bottle of soda

You'll probably be surprised that they're a lot more similar than you thought All right, this next one is near, and dear to me because I made this mistake, and hopefully I'm going to help you avoid it now, too Deli meats; avoid them at all costs You see, when I first started training I wanted to get more protein in my diet So I ran to the local deli and started ordering my roast beef, my turkey, and my chicken

The thing is, I didn't realize I was also getting, with these, a lot of additives, fillers, chemicals, and sodium I probably should have clued in when I was looking at that perfectly round chicken breast I don’t think I've ever seen one of those in real life So you have to realize, guys, that when they make these things they compile them, and they mix them all up, and they form them into these little balls full of all those things I just told you about If you probably dropped one, the damned thing would probably bounce

So what I'm going to recommend instead is to avoid this fake chicken – or 'ficken', as I call it – and opt for the real deal Go get real chicken breast Go get real turkey breast If you don’t have the time to make it yourself – I already made a video on this great way that you could actually go to the catering counter at your local grocery store, and order all this in bulk Then you have it, you can freeze it, and you can use it as you go

But do me a favor and avoid the deli meats Opt for the real deal instead Whoa, whoa, whoa, whoa! So there you have it, guys There are the eight trip foods that are no longer going to trip you up because you know better If you're looking for a plan that lays out all the things that you should be eating, I've already done that for you guys

As a coach I want to take the responsibility to not only show you the right workouts, but how to eat because we know how the two go hand in hand They're all available over at ATHLEANXcom, in a step by step plan If you're looking to join Team ATHLEAN there's no better time than now, guys I'll see you over there

In the meantime, if you've found this video helpful leave your comments and thumbs up below Let me know what you want me to cove r in a future video and I'll do my best to do that for you All right, guys See you soon